What on elf is an ELF?

I was thinking the other day back to when I came across the term ELF (English as a Lingua Franca) for the first time. It was back in 2013, I think.

And do you know what?

I literally thought it had something to do with, well... 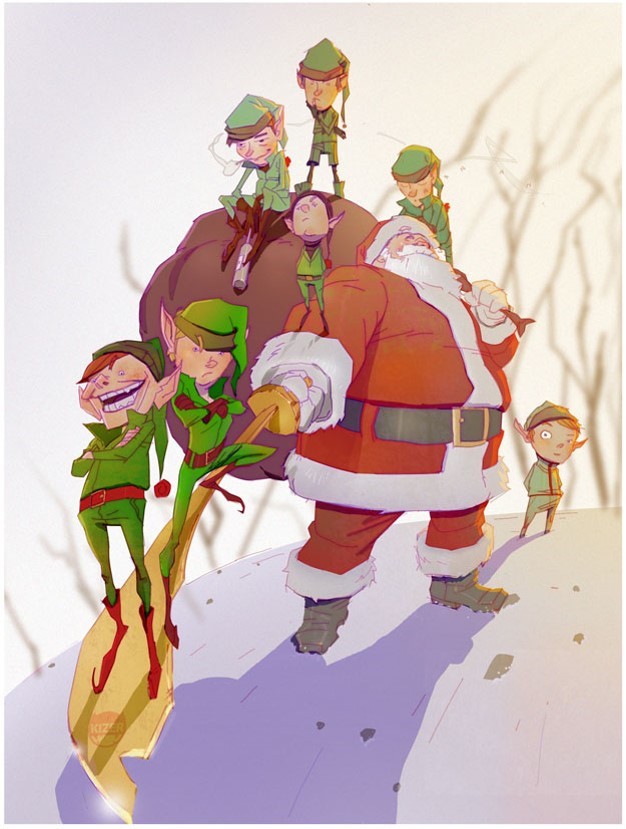 And Santa Claus and delivering presents.

Honestly, I was completely clueless.

The funny thing was, though, that by that time I already had a BA in English Philology, CELTA, DELTA and about 5 years of teaching experience. And I would consider myself a fairly interested teacher, who would seek professional development opportunities and go to workshops, or read blog posts, for example.

Not every day, but you know what I mean ;)

Yet, ELF had never been even mentioned in any of my teacher training or degrees that I'd done.

I might have been unlucky, but the last time I looked at CELTA syllabus, there was absolutely nothing there on ELF. There is some mention of varieties of English on its curriculum, and while a successful candidate should “understand the main ways that varieties of English differ from one another”; the CELTA trainers I’ve spoken to all confirmed that it’s entirely up to them whether to talk about the lingua franca/international nature of the English language, or not.

I know - it's a very intense 4-week course. But if there's enough room to keep the long debunked learning styles on it, then it's curious there's no space for ELF.

When I started delving deeper into the topic, I discovered that there was a whole thriving research community who had been publishing research on the topic since the early 90s.

Since then, I've given numerous workshops on the topic, and one of the most consistent feedback I get from participants is: Marek, I'd never thought about that before. OR Marek, this is all new to me. OR I never realised that there were so many practical implications of ELF.

This to me shows that there's a huge gap between research and practice as far as ELF is concerned. A gap that I think must be bridged. This was only confirmed by the debate about the relevance of ELF at IATEFL 2017, where Peter Medgyes tried to convince the audience that ELF is of no practical interest to teachers (and in the process unfortunately showed his own lack of understanding of ELF research).

Side note: If you're interested in learning more about ELF, then sign up for this FREE 5-day email course where you will not only get a better understanding of what ELF is, but also of the numerous practical implications it's got for all of us in ELT.

So what is ELF?

Let's start with an early definition from Firth. He defines ELF as “a ‘contact language’ between persons who share neither a common native tongue nor a common (national) culture, and for whom English is the chosen foreign language of communication” (Firth, 1996, p.240).

If we look at it closely, it's clear that it only applies to 'non-native speakers' (i.e. people for whom English is a foreign language). I know what you're think - defining a 'native' or a 'non-native speaker' is a tricky matter, but let's not go down this rabbit hole in this post. I promise I'll write one addressing this issue soon.

Firth's definition created a great deal of controversy and debate. But as ELF research progressed, definitions were proposed that would include all users of English, regardless of their L1. So for example, over a decade after Firth, Seidlhofer defined ELF as "any use of English among speakers of different first languages" (2011, p.7) - by the way, if you haven't read her book Understanding English as a Lingua Franca (see the reference list below), where the quote comes from, I highly recommend it.

To give you a practical example, in the university where I teach in Belgium, all my colleagues (apart from one who is from the UK) are Flemish. Since I don't speak Dutch and they don't speak Polish, we use English as means of communicating. Similarly, if I go to an ELT conference, there might be thirty different nationalities ('native speakers' of English included), but we will all use English to communicate.

This is quite different from the typical EFL (English as a Foreign Language) or ESL (English as a Second Language) scenario, where the assumed interlocutor is a 'native speaker'. As a result, what's typically taught in an ESL or EFL classroom is a standard variety of English, which most likely equals British or American English. While I'd agree that the course book English might not have much to do with how 'native speakers' actually speak in daily life, but it's certainly based on a standardised 'native' form of the language.

And this is how ELF is also different. It is true that at the beginning ELF researchers focused on identifying phonological, lexical and grammatical characteristics of ELF, thus effectively treating it as a a language variety. However, this has changed a lot in the last decade.

As Cogo (2012, p.98) points out "research in this area is not about identifying the core features that make ELF a variety (which it is not), [but],it is about describing the practices involved in lingua franca communication". Cogo then adds that ELF research now aims to "highlight the pragmatic strategies speakers draw on as they collaboratively engage in communication" (ibid, p.99).

Similarly, Jenkins (2009, p.201) points out that "from an ELF perspective we all need to make adjustments to our local English variety for the benefit of our interlocutors when we take part in lingua franca English communication. ELF is thus a question, not of orientation to the norms of a particular group of English speakers, but of mutual negotiation involving efforts and adjustments from all parties".

In other words, ELF research is NOT about trying to establish ELF as a new variety of English that has a core set of phonological, lexical and grammatical features that make it different from other varieties. What it does focus on is the strategies that English users employ to communicate effectively in international, lingua franca settings. And these strategies are very important for successful communication in ELF settings.

Reminder: If you're interested in learning more about ELF, then sign up for this FREE 5-day email course where you will not only get a better understanding of what ELF is, but also of the numerous practical implications it's got for all of us in ELT.

OK, but what does all this mean in practice?

It's a very good question, and it definitely merits a full blog post (or more likely a whole series of blog posts), so stay tuned :)

But let me just give you a list of ELT areas where I think ELF has some very important practical implications for:

We could discuss each of these areas in quite a lot of detail, but I've realised this post is already becoming longer than I intended it to be, so it will have to be another time. If you don't want to miss future posts, follow the blog below and get them right into your inbox.

And if you can't wait for the next blog post, then definitely enrol on this completely FREE email course about ELF.

PS And let me know what your thoughts about ELF are. In order to comment, you'll have to create an account on TEFL Equity academy in the top right-hand corner. It'll take two seconds. And I'd love to hear back from you :)